The Atlantic Treaty Association of the United Kingdom has been relaunched under new leadership and in a new institutional framework: an autonomous programme supported by “Resilient Futures”, a non-profit body which focuses on national and international security issues.

ATA UK’s main goal is to ensure that citizens of the United Kingdom are aware of what NATO does and what it stands for.

As soon as circumstances permit, ATAUK will commence “real-world” programmes and activities, but until then, it is limiting itself to delivering on-line meetings and content. 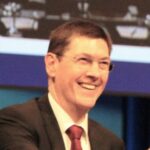 David was the Secretary General of the NATO Parliamentary Assembly (NATO PA) from January 2008 until the expiry of his mandate at the end of December in 2019.

As Secretary General of the NATO PA he had overall responsibility for advising the Assembly’s political leadership, an extensive programme of policy research, and up to 40 activities a year for the Assembly’s 60 member and non-member delegations consisting of over 400 parliamentarians.

He joined the NATO Parliamentary Assembly in 1983 as Director of the Science and Technology Committee, a position which enabled him to draw upon his background in both science and security studies. In 1987, he took up the additional responsibilities of Director of Committees and Studies, coordinating the work of all five of the Assembly’s Committees, and he was appointed as Deputy Secretary General in 1997.

He was one of the key personnel involved in the Assembly’s adaptation to the post-Cold War environment which has included parliamentary outreach and training programmes, assistance with security sector reform, and the integration of non-member parliaments into the Assembly’s activities. 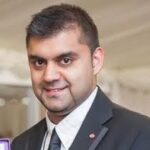 Riaz Ravat BEM DL is ATA UK’s Head of Engagement whose main task is promoting awareness of NATO to educational and community bodies.

As Deputy Director of St Philip’s Centre – a charity set up in 2006 and rooted in Leicester’s multi-faith environment – Riaz is immersed in advancing interfaith understanding and relationships at local, national and international levels. He is Secretary-General of Baraza e.V. – an international peace-making non-governmental organisation based in Germany.

He has national and international experience in promoting religious and belief literacy in institutions such as the police, armed forces, fire services, local government and educational bodies.  This includes running programmes to develop and share best practices to strengthen relationships between police forces in the UK, Belgium and the Netherlands with their respective black and minority ethnic communities.  He has also been extensively engaged in a variety of UN programmes both within the United Kingdom and abroad, particularly in the Middle East.

Riaz is a high-level administrator having strengthened the governance of the Prevent scheme in Leicester, created a whole new structure for religious and belief education programmes, secured funding streams and forged partnerships.

Riaz has contributed to the Commission on Islam in the UK, the Prime Minister’s Extremism Task Force, the Commission on Religion & Belief in Public Life and the Joint Committee on reform of the House of Lords.

He serves on numerous bodies, including the UK Government’s Anti-Muslim Hatred Working Group, the Queen’s National Honours Committee (Public Service) and is involved in promoting diversity and inclusion in football.

He was awarded a British Empire Medal in 2012 and was commissioned as a Deputy Lieutenant in 2015.

Riaz was named as Alumnus of the Year by De Montfort University in 2013 for “uniting different cultures, races and religions” and in 2010 was winner of the Leicestershire First Citizenship Award. He has authored and co-authored publications on interfaith relations and has previously worked in media communications in the public sector.